On December 10, 1899, Hermann Hartmann climbed Galzig on skis for the first time. In a little more than 3 ½ hours he reached the summit from St. Anton via St. Christoph – a very respectable time, even by today’s standards. Back in the Hospiz, Hartmann recorded the first winter ascent of Galzig in the guest book: ‘With snowshoes from St. Anton to St. Christoph in 1 ½ hours, from St. Christoph to the Galzigspitze, 2185 metres, in 2 hours 10 minutes, downhill in 18 minutes, snow height 0.68 to 1.60 metres - wonderful panoramic view.’ And that same wonderful view remains to this day...

Other skiing pioneers in the Arlberg were Professor Karl Gruber, Max Madlener, Josef Ostler, Hospiz host, Oswalt Trojer, and Viktor Sohm. And among the young locals, the summit stormers attracted attention, with some of them even attempting to make their own skis themselves. 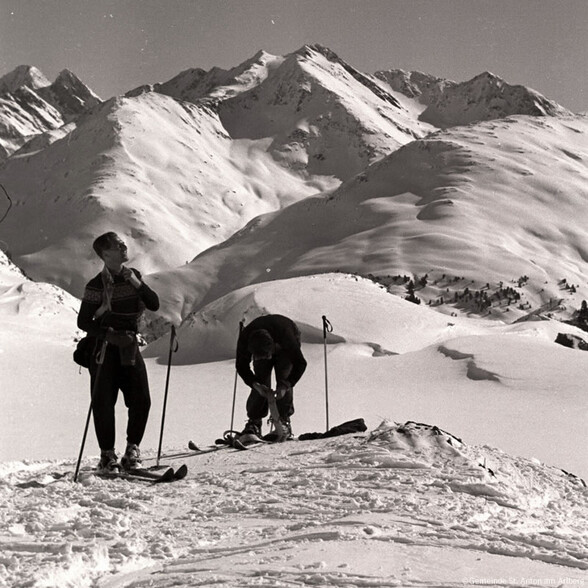 Two years earlier, a group of friends had made skiing history in the Arlberg. On Christmas Eve 1900, after long discussions about skiing, they decided to go on a ski tour to St. Christoph. On January 3, 1901, the time had come. In bright weather and powder snow, they set off for St. Christoph, soon reaching the top of the pass – and ‘stuck’ with the Hospiz landlord.

By their own account, more wine than tea was drunk, and the evening wore on and on. The euphoria of their achievement, no doubt encouraged by their host’s generosity and the flowing wine, culminated in a historic guest book entry. Adolf Rybizka made the suggestion to found a ski club. The idea was accepted, and Rybizka wrote in the Hospiz’s guestbook: ‘Enchanted by nature, thrilled by sport, imbued with the necessity of creating a modest meeting point on the Arlberg for the friends of this noble pleasure, the excursionists involved in the ex tempore felt moved to found the Ski-Club Arlberg’. And so, the first après ski of the many millions more that followed in the Arlberg, brought about the first meeting of this most significant and historical ski associations.