Schwabenkinder or “Swabian Children” is what the children from Tyrol, Vorarlberg, Liechtenstein and Switzerland were called who were sent to work on farms and town houses in Upper Swabia and Allgäu during the summer months from the 17th Century right through to the 1930’s.

Every year hundreds, sometimes even thousands, of children migrated to the Lake Constance region where a shortage or workers prevailed from spring to autumn. Large families from the impoverished alpine region were glad when their children and young people could work as maids, servants and farmhands in Allgäu from St. Joseph’s Day (19th March) to St. Martin’s Day (11th November) as they had fewer mouths to feed at their own tables. This fate was also met by many children here in Schann, who joined the hordes of passing Swabian children from Vinschgau and Upper Gericht.

In 1891 Schann’s priest, Father Schöpf, could no longer stand by and watch the plight of the Swabian children and, with the help of Pettnau’s mayor and member of Tyrol’s regional parliament, Josef Anton Geiger, founded the “Hütkinderverein – Children’s Mountain Refuge Association” to benefit the Swabia-goers. The “Hütkinderverein” was staffed and managed by members of the local clergy who ensured that the children were well cared for during their journey to and from Swabia, treated well during their period of service and justly recompensed at the end of their stay.

Franz Kurz, born in 1846 in Pettnau as son of Franz Kurz the “Tanner” and his wife, Frau Maria Anna Platt, wrote about his personal experiences as a Swabian child in the book, “Verkehrs-Geschichte des Arlberg (Traveller’s history of Arlberg): „Possessed by an enterprising urge I, the 12 year old Franzl, decided in the spring of 1858 to join other school children on their journey to Swabia, in order to escape the hated root picking and ploughing furrows in the fields of home. I could earn hard money in Swabia as well as high boots and even learn the Swabian dialect on the side“. Franz Kurz, who chose the arduous path to Swabia for quite different reasons than most other Swabia-goers, got caught in a snow storm near Stuben on his way home after a good summer and almost died. In another part of the book Franz Kurz tells us a little about one of his travelling companions, Cassl:

„Cassl, a small lad also on his way to Swabia, believed the 6/8 rhythmic thrashing of the village mill in Stanzertal Valley was in fact a warning cry: „Cassl, turn round! Cassl, turn round!“ Cassl became uneasy, yet still climbed the Arl and found reassurance in St. Christof. However, on reaching a village in the Klostertal Valley he heard this ominous rumbling again, this time with the cry of alarm: „Get out, you’re dead, get out, you’re dead!“ to which Cassl turned straight round and hurried back to his mother.“

If you take the same route as the Swabian children did through the Stanzertal Valley towards Arlberg, you will pass the Volksschule (elementary school) in Pettnau, whose north side is covered by a 4m high banner on which a colossal statue of St. Christopher is pictured. This is a picture of the statue, Schwabenkinder am Arlberg, Bludenz, 1992, in original size. Picture: Rudolf Kathrein. Hometown Flirsch, Flirsch 1995. Reaching the statue was a significant part of the journey for travellers and Swabian children, who often cut small wood chips from it and kept them in their pockets as a keepsake to stave off homesickness. The statue stood in the chapel of the Arlberg Hospiz until a fire in 1957.

The Birkl Brothers from St. Anton

With his brothers Franz Xaver (1899 - 1910) and Josef (1895 - 1916), Rudolf was one of the last boys from Oberdorf, who migrated to Swabia to work. All three were sons of the road worker, Josef Birkl (1865 - 1928) and Theresia Nigg (1863 -1950) and born in Waldhäusli. Their father, Josef Birkl, was known as „the blind saddler”, because he went blind in 1902 and had to give up his job as road worker in „Adlerwald” (Arl Forest). The family moved down to Oberdorf Nr. 84, where their successors still live today. Franz Xaver died in after a short but serious illness in Tettnang, where he was working for a farmer. Rudolf worked as a Swabian child on a farm in Sonthofen in the Upper Allgäu. He sent a postcard home, on which a goat is pictured:

I want to write you a few lines. I am healthy, which I hope also applies to you. Franzelina has written to me once. We always have bad weather. That is my milk wagon on the front of this card, I receive cards like this. Write to me.

I send you greetings,

Some of these travelling slaves, as they were also referred to by socially critical thinkers, have also left their intellectual mark in literature on this chapter in alpine history. Their words and other references to the Swabian Children in our home village can be found during a visit to KUNSTRAUM in Pettneu and St. Anton’s Heritage Museum. 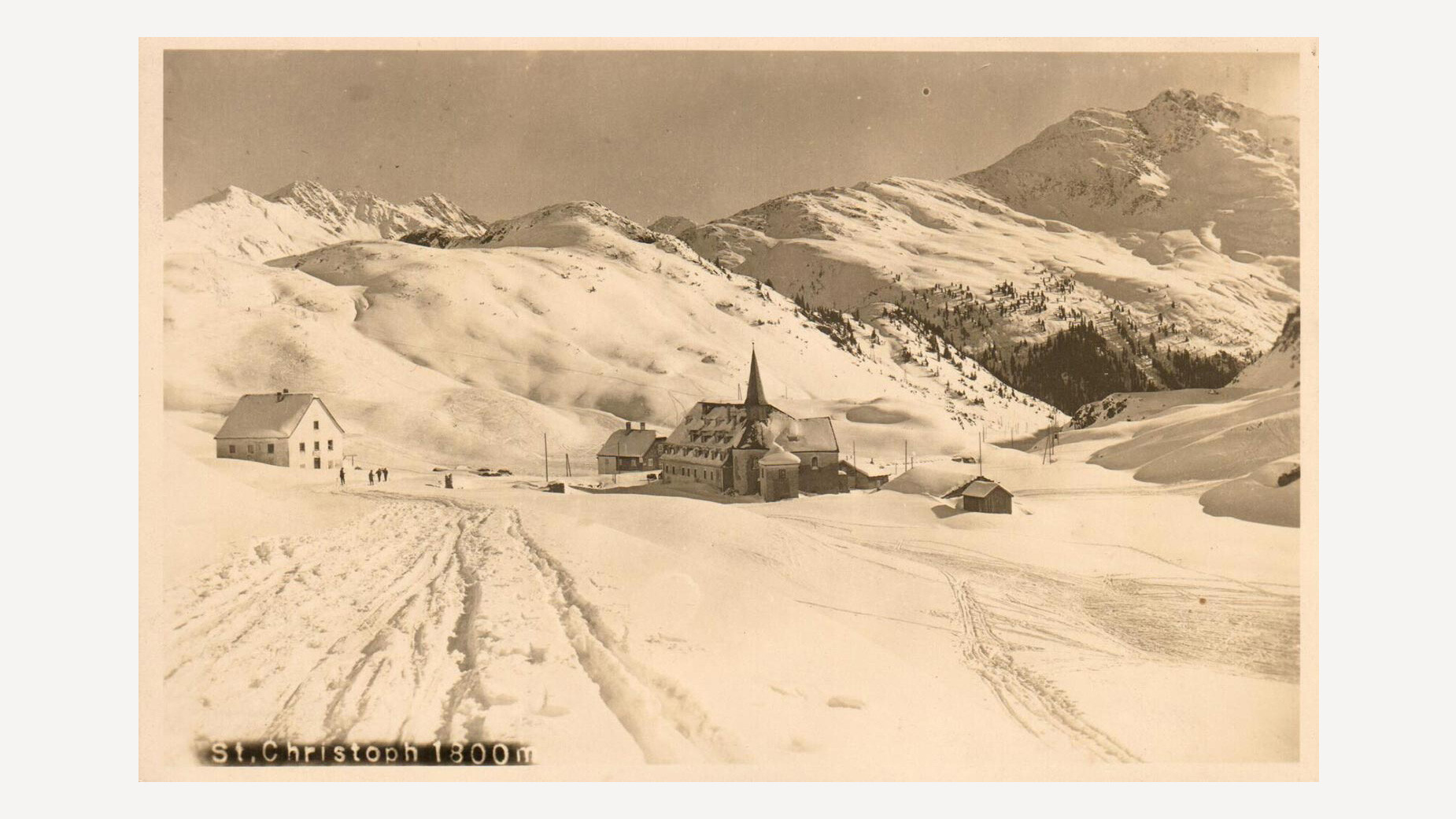