The history of St. Anton am Arlberg

St. Anton am Arlberg is considered the cradle of alpine skiing and continues to write winter sports history.

But the skiing history of St. Anton am Arlberg began with the work of a Norwegian engineer in the 1880s. He came to the Tirol to build the Arlberg tunnel, but the locals remember something else: the two boards with which he glided through the snow to work. But the people of St. Anton were sceptical, and even the parish priest of Lech couldn’t convince them when he drew perfect arches in the snow ten years later. This small village was far from becoming one of the most popular winter sports resorts in Europe, with a reputation that carried across the world, mired as it was in the hard everyday life of mountain farming that shaped the villagers’ lives.

From restraint to euphoria

At the beginning of the 20th century, this initial scepticism gave way to pure enthusiasm. Local people no longer wanted to leave it to strangers to glide down the slopes in telemark style – suddenly the spark jumped over to St. Antonians. In 1901, the Ski Club Arlberg was founded, which today has more than 9,000 members worldwide. They are not the only ones who appreciate St. Anton am Arlberg because of its perfectly developed ski area and its cosiness, which the former mountain farming village has been able to retain. With their Tirolean charm, the locals still delight and surprise many a guest on vacation in the Arlberg for the first time. 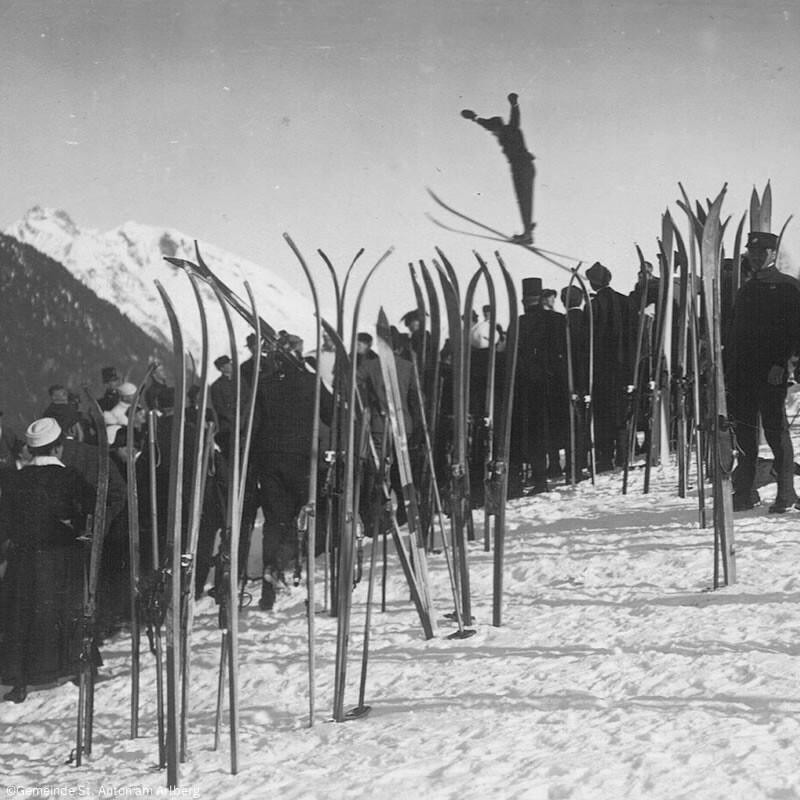 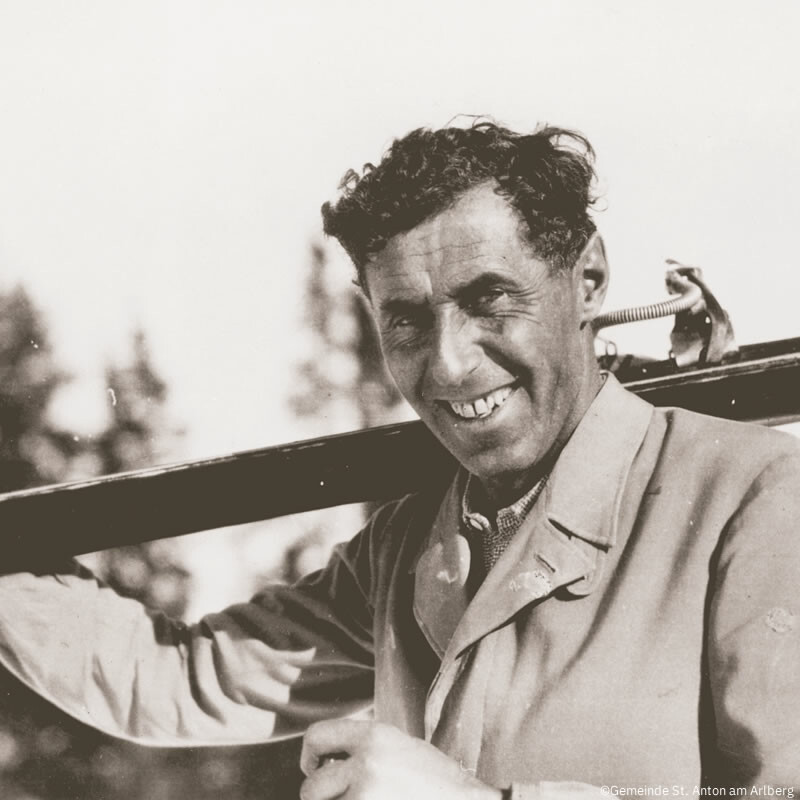 A skier becomes the idol

With increasing popularity, more and more winter sports enthusiasts were looking to find the best technology to make their enjoyment even greater. In the eyes of many, the telemark style commonly used until then was not exactly ideal for surviving downhill runs free of falls. In the high alpine terrain around St. Anton am Arlberg, the lunge provided little stability and catapulted many a skier out of the race. But a 13-year-old, of all people, discovered a unique and new downhill technique for himself, and developed it further year after year. The young whirlwind with the flashing eyes was Hannes Schneider , and for him there was nothing in life except skiing. He was the first one to shift his weight to turn, and then to turn the skis around. He squatted down for schusse’s, in order to better balance himself at speed on uneven terrain. And just as fast as his descents were his career ascents, as Hannes Schneider became known around the region for his skiing technique. For the landlord of the Hotel Alte Post he taught the house guests, and made even those from the flat valleys carve elegantly down the slopes.

The first ski school is built in St. Anton am Arlberg

Hannes Schneider attracted more and more guests who wanted to learn his technique. This gave a strong boost to tourism, because now it was ‘in’ to spend the winter in the mountains, and especially on the slopes. In the winter of 1921/22, the ski instructor Hannes became the entrepreneur Schneider, founder of the first ski school in St. Anton am Arlberg. He had an idea that was groundbreaking for the time; dividing the ski students into groups according to their individual abilities. There were fixed guidelines for the course contents in these groups and, above all, trained ski instructors – a revolution. 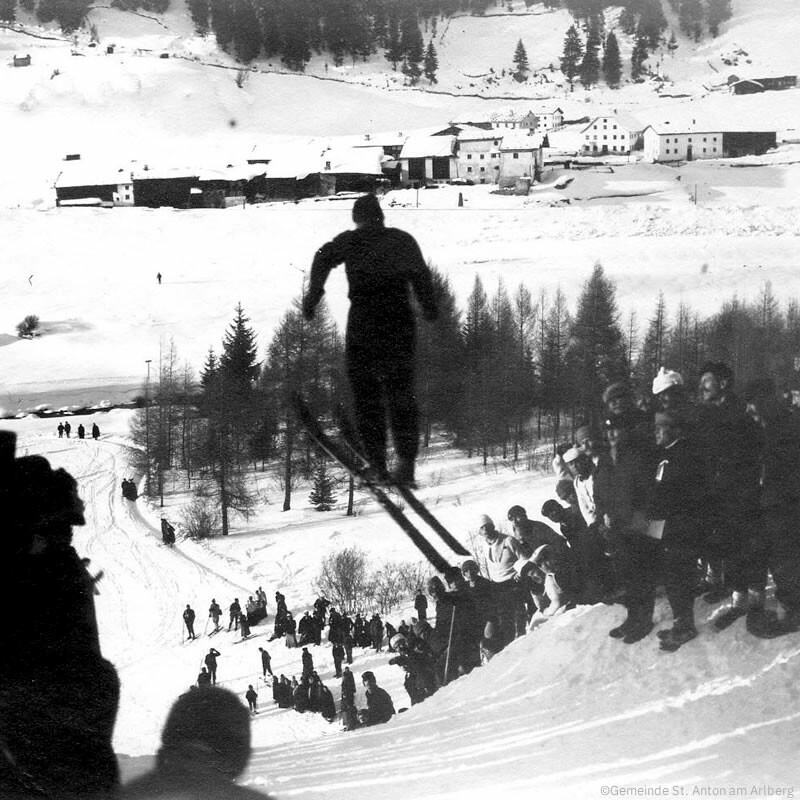 The Golden, or Roaring Twenties

And the ski pioneer, ski instructor and heartthrob, Hannes Schneider, became a feature film actor - which seemed like a natural development for a man like Hannes Schneider. Director Arnold Fanck of the German "Freiburger Berg und Sportfilmgesellschaft" directed him in front of fantastic panoramas of snow-covered peaks, which provided the natural setting for Schneider’s starring roles. Now cinema goers all over the world saw Schneider's Arlberg method on the big screen, and quite a few were inspired to conquer the slopes themselves. Those who could afford it even travelled to the original location of the films ‘Der Weisse Rausch’ or ‘Wunder des Schneeschuhs’. And so the ‘Golden Twenties’ were a truly golden time; not only for Hannes Schneider, but also for the ever-increasing number of hoteliers in St. Anton am Arlberg who hosted the guests.

In 1937, St. Anton am Arlberg was once again ahead of the competition. The Galzigbahn was one of the first gondolas in the Alpine region. It carried 210 people per hour up to the heart of the ski area. And after several updates and conversions over the years, an innovative cable car sensation was created in 2006: The completely newly built Galzigbahn is based on the technology of a Ferris wheel and allows passengers to board at ground level. The sensational, eye-catching building is always a talking point, as the unique glass construction looks like a giant crystal in the snow, and is illuminated from inside at night.

Less than three years later, St. Anton am Arlberg was enriched by another ultra-modern lift system. The old Rendlbahn from 1974 was replaced in 2009 by an 8-seater monocable gondola with heated seats. In the past, skiers had a fairly long walk, or a short bus ride, to get from the ski area at the Galzigbahn to the old Rendlbahn. Today, the new Rendlbahn base station is just a stone’s throw from the village centre.

And in addition, since December 2016, both these new gondola lifts are a part of the largest contiguous ski area in Austria: with the opening of new connecting lifts, the Arlberg Arena now extends with more than 300 km of marked runs, and 88 lifts and cable cars from St. Anton in Tirol via Lech and Zürs, to Warth and Schröcken in Vorarlberg. The resulting ‘Run of Fame ’ ski circuit is dedicated to the two St. Anton winter sports legends, Hannes Schneider and Karl Schranz , among several others. On the 85 km and 18,000 meters of altitude difference through the entire Arlberg-Arena, the ‘Run of Fame’ stars are a reminder of the great ski pioneers of the Arlberg.

Whether it’s the legendary Arlberg Kandahar Race , or the equally famous ski race ‘The White Thrill ’, or the weekly ski show –  this Tirolean winter sports resort offers many varied possibilities for a fabulous stay, both during the day and after the last downhill run home... or to après ski.

And with the multifunctional sports and climbing centre arl.park , the range of sports available in the St. Anton am Arlberg region are even more varied and weather-independent. Thanks to a flexible special flooring and the extravagant, angular architecture of the hall, numerous activities are offered here: Tennis, volleyball, squash, bowling, climbing and bouldering. A ‘via ferrata’ even leads to the 18-meter-high tower of the sports centre. And the arl.park trampoline hall, with a total of 1,000 square meters of space has added further possibilities for those of you with still some energy left to burn. So, it’s not surprising that St. Anton experiences more than one million overnight stays every year.