Increasing industrialisation in the 19th Century also led to rapid developments in the construction of railways. For technical reasons, mountain ranges were initially bypassed. It is quite amazing that the first trans-alpine railroad, the Semmeringbahn, was built during the otherwise so “progress-resistant” times of the Austro-Hungarian Empire.

The Brenner Railway was opened in 1867 and construction of the railway from Tyrol to Vorarlberg by industrialist Carl Ganahl started on the Vorarlberg side as early as 1847. The section from Bludenz to Lindau opened in 1872, as did the connection to Switzerland. Even though Vorarlberg was connected to Austria via Bavaria, dependence on a foreign country introduced considerable uncertainty. With Austria’s exit from the German Confederation in 1867, this uncertainty was exacerbated. So it was decided that Vorarlberg would be directly connected to the Austrian network; a decision supported by the planned military use of the railway.

The engineers rose to the challenge and, under the direction of Julius Lott, the railway line was planned through the sparsely populated valleys of Stanzertal and Klostertal.This “construction of the century” was completed in only four years. The sub-route of Innsbruck– Landeck went into operation in 1883 and the Landeck – Bludenz mountain route was inaugurated by Emperor Franz Josef on 20th September 1884. Their architect, Julius Lott, unfortunately did not live to see this as he passed away a year before on 24th March 1883. In his memory, a monument has been placed on the site of the old eastern portal of the Arlberg Tunnel in St. Anton am Arlberg. Countless impressive constructions including retaining walls, over and underpasses, daring bridges such as the Trisanna Bridge and not least the 10,249 metre long dual-track Arlberg Tunnel are some of the defining characteristics of this mountain railway. Even away from the railway line, extensive building work was required to ensure the railway’s safety. Vivid examples of this are the avalanche barriers on the so-called “West Ramp” (on the Vorarlberg side). Especially in the area from Langen to Braz, avalanche barriers had to be built at great heights which provide effective protection not only for the rail line to this day, but also the residential areas. Construction of the Arlberg Railway also had a sustainable social impact. During its construction period, thousands of workers from all parts of the Monarchy found their way into our valleys. Bricklayers and stonemasons from Trentino were particularly sought after craftsmen and the surnames of many local families today are an indication of the true origins of those who never returned. Construction of the railway also instigated the early days of tourism, which soon dominated the entire region. In only its first year of operations, 130,000 people travelled on this railway. In the last three decades, however, the car has replaced rail as the main means of transport for incoming tourists. Furthermore, the railway offered welcome earning potential as a reliable employer. In its heyday, the Arlberg-Bahn employed around 150 people in various departments at St. Anton station alone. During its early years, the Arlberg Railway only had steam trains in operation. This led to unacceptably unhealthy conditions for the train crews, as the Arlberg Tunnel was always full of harmful billowing smoke. The first project for electrification of the railways was therefore put into motion in 1908 and finally realised from 1923 to 1925.

Other notable years in the history of the Arlbergbahn:

1893-1925: Track modifications
1923-1925: Electrification of the Arlberg Railway by constructing Lake Spullersee hydro electric plant.
1925: Last steam-powered express over the Arlberg (13th May)
1964: Spectacular exchange of the Trisanna Bridge supporting structure in only 13 hours
1969-2003: Gradual expansions for dual track operations
1999-2000: Relocation of St. Anton Station to the south side of the valley, expansion of St. Anton – Schnann
2001: Schnann is used as a stop for shuttle services to St. Anton during the Alpine Ski World Cup
2008: Opening of a management centre in Innsbruck

Schnann was always intended to be a stop on the Arlberg line and was put into operation in 1885. A goods depot used to be on the south side of the railway track and a residential house on the north side, with a rail guard’s house attached. The guard was responsible for operating the signals and two hand barriers. He also had what we would call “direct customer contact” today, by selling the rail tickets. During dual track expansion works in the year 2000, the guard service was discontinued and the remains of the guard’s house were demolished. Nowadays, Schann residents are protected from the sound of the trains by a noise barrier. 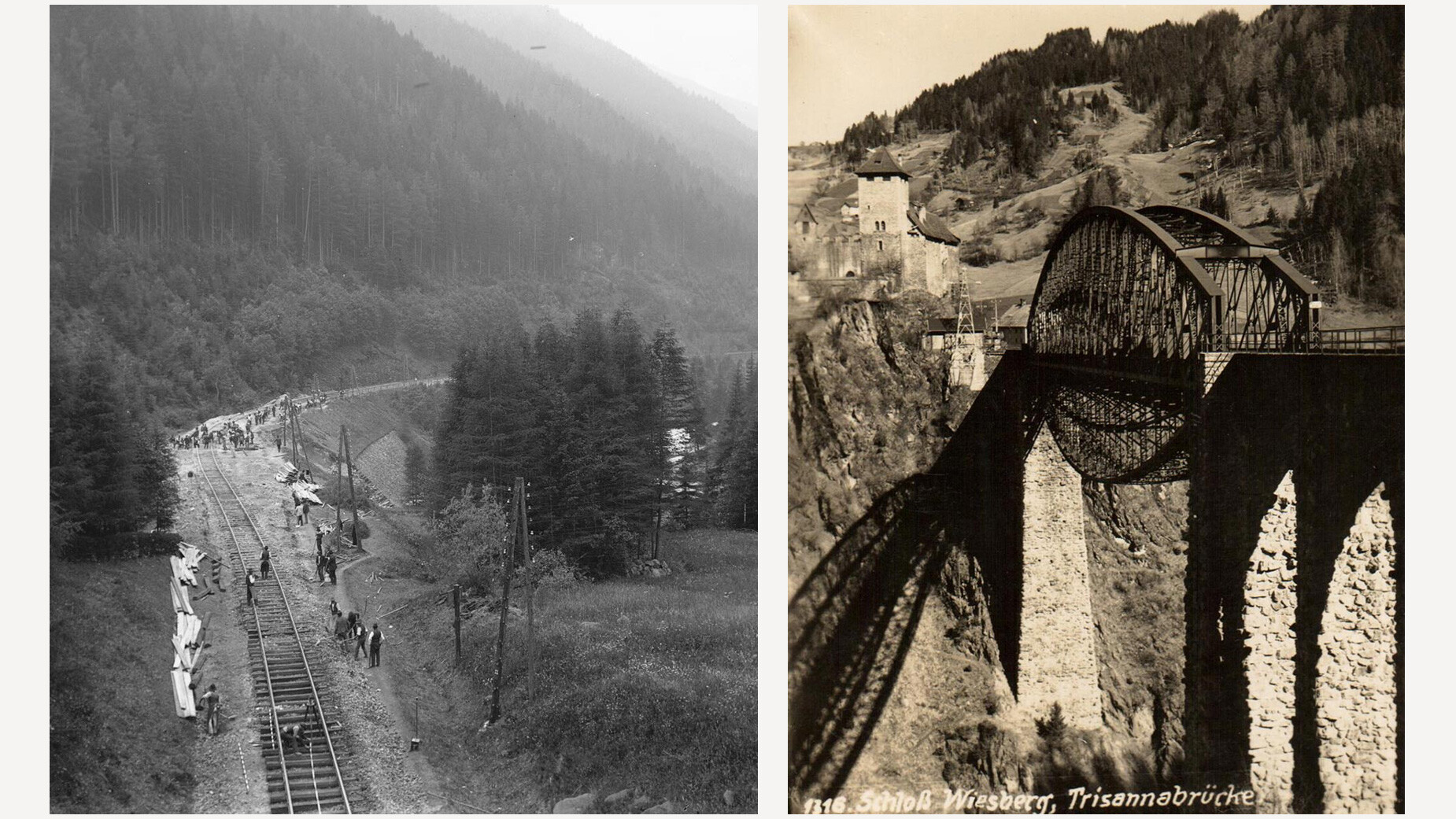